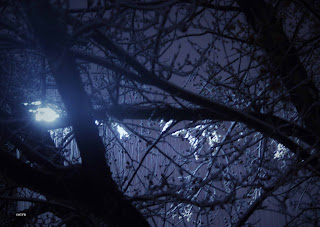 Hiding in the dark void, a comforter of white billows over the ground
Adding scattered starry sparkles that have fallen from above
The thin opening in the front window pulls cool breezes inside
To the accompaniment of an occasional slushy traveler on the street
Not the harshness of winter’s voice and frigid wrap
Just a simple spring storm, led by gentle drops that became crystal wings
Spinning toward the ground beneath the black gray abyss above.