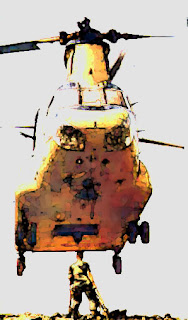 First load of the day was off the ground and we were headed to a Korean firebase with a basic load of 105 rounds and a few boxes of c-rats. The door gunner and my chief relaxed up front while I lay in the hole watching the load. It had been an early morning like most, 4 AM on the flight line opening panels and running through the preflight check with my crew chief.

The Wobblies showed up a little later and I walked with them as they rechecked everything we’d just looked over. Sign off on the logbook and we were rolled out of the revetment. A couple of more “in the seat checks” and the APU whined to life pressurizing the hydraulic system. Watching from out back I listened to the cockpit talk as they fired number one. With a puff of unspent JP4 the turbine began its slow run up and the blades started to rotate. Then number two came on line and the blade rotation accelerated.

The smell of burning jet fuel filled the swirling air. With both engines on line I climbed the ramp closing it behind me. As the pilots began running the engines up to speed I walked the length of my ship. Listening for the usual grunts and groans she’d go through every morning, slight shake from that damn low right front gear. The ic crackled – “not fixed yet?”

“No, sir but it’s getting better, we’ll try again tonight”, I lamented. We’d already adjusted everything from the tire and shock pressure to the travel height.

By now we were rolling off the flight line and onto the taxiway. Then the radio and intercom came to life again with taxi instructions, weather, wind direction etc. She finally rose off the ground to hover for SAS check and then we were cleared for takeoff. Her tail lifted and nose dipped slightly as the two up front pushed and pulled this and that taking us from a hover to flight speed in no time.


“Cowboy” I chuckled to myself with a grin as my chief and I exchanged glances. He threw a thumbs up and so did the gunner. I laughed as I reached to the front transmission sump to feel the “good vibrations”, glanced at the SAS closet and then headed toward the ramp. Checking things out along the way, tool box was tied down, M70 in place with a belt of ammo, hook door was closed and then near the aft tranny I reached up to gently touch the flight control rod set before ending with the aft transmission sump. She was running well, another good day in the air. 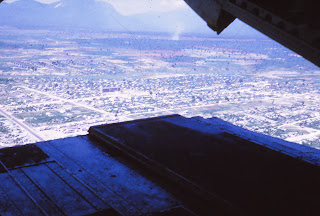 I lowered the ramp to flat and pulled up a seat to enjoy the flight. I was always proud that my ship never had a scrub because of mechanical issues. My chief and I worked hard to keep her airworthy, after all we had to fly on her too. As a former TI and maintenance leader I knew a lot about her. And as we flew together I learned even more. I memorized her voice; she was always talking to me. I knew the “good vibrations” and the bad ones, how hot she’d run, the slight chatter from the next to last section of drive shaft, the gurgles from the pumps on the aft transmission – even how many full pumps it would take to get the hydraulic system to turn and fire the APU.

There’s nothing like flying in a hook, lots of windows and your own back porch to sit on. It always amazed me how free, how uninhibited I felt once we were in the air. Sure I was sitting on a few tons of metal that miraculously stayed in the air. But all the intercom talk, the whine of engines and transmissions, the threat from below would suddenly disappear. I was there all alone looking out across the landscape and into the blue sky, feeling like I could step off that ramp and become part of the atmosphere or effortlessly glide through the air like a bird. Free to go anywhere, to meld with the puffy clouds or mix with the occasional rain squall. Nowhere else have I ever felt a feeling like that, so all encompassing, joyful, exuberant.
The chatter of a pair of M60’s would bring me back to earth so speak. The pilot had cleared us to run a weapons check and both the gunner and my chief opened up with a few short bursts spewing a few cartridges that made their way along the flooring like a handful of grasshoppers. Not long after we were settling in over the PZ and it was time to go to work.