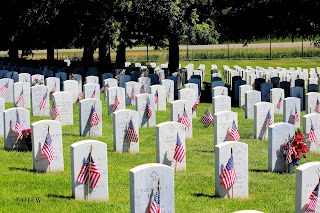 Many times I have stood at Ft Logan National Cemetery on Memorial Day in the warm spring sunshine amongst 10's of thousands of white washed tablets, each marked with a name and a flag, a very emotional experience to say the least. Each time I survey the acres of stones so evenly placed, standing in formation as did each of the veterans whose resting place they mark, I marvel at the courage and honor and bravery and sacrifice they made. Certainly not all died in battle, but they pledged that same oath that I and millions of others have pledged - "I do solemnly swear that I will support and defend the Constitution of the United States against all enemies, foreign and domestic; that I will bear true faith and allegiance to the same; and that I will obey the orders of the President of the United States and the orders of the officers appointed over me, according to regulations and the Uniform Code of Military Justice. So help me God." And beyond that was the unspoken pledge to those they served alongside of.
Many stood in harm’s way and performed acts of heroism that are not recorded anywhere nor rewarded with ribbons or medals, instead most have simply been kept close to the hearts and minds of others involved. Most were satisfied with the reward of a pat on the back or helmet and a sincere "thank you" from their buddies. How many stepped up when others hesitated, how many endured the bitter cold or oppressive heat, the lack of rations or ammunition, how many took their aircraft or artillery or armored vehicles or ships to their limits and beyond - all in the name of freedom and liberty and honor and friendship and love? How many? Thousands of stories lay buried there and I know of all too few.
Holiday is a poor choice to describe the day - holiday brings thoughts of fun and excitement and joy to my mind - the day is not that kind of celebration, and anyone who would suggest having a “Happy” Memorial Day has absolutely no idea what the day is about! In addition I will accept the misguided thank you’s that come my way… it is NOT my day. It belongs to those who have given up their lives while serving during the numerous conflicts and wars involving the United States of America.
In the next few days I will add a few pictures and quotes to my Face book page and Tumblr blog in an effort to raise the awareness of as many friends and followers as possible. Some already share in my feelings - most are my fellow vets, my buddies, my brothers and sisters. They know. I only hope that by sharing what I have that a few others will gain some small amount of caring, of recognition, of respect for Memorial Day.
To this day and hopefully forever - whenever the Star Bangled Banner is played I will be able to stand straight and true and salute my country and those that have kept it free. That tears will well up in my eyes at the sound of Taps, the pipes playing Amazing Grace or the images of another brother or sister being laid to rest.


"Leave no man be behind - Neither in the heaviest of firefights nor the wasteland of their own mind, fighting demons that lurk in dark corners and follow, relentless, biting at heels and unguarded flanks, fraying the edges of sanity to ribbons with needle sharp teeth and vicious whispers. A feast for doubt and despair that weakens even the strongest, for one cannot stand vigilant forever when war is left behind, but the battlefield remains in the heart and mind, forever indelible."   Rhi Etzweiler
Posted by Tony Garramone at 10:27 AM