It’s “that” time of year again… time for me to give in to those dastardly purveyors of dessert discs – the Girl Scouts of the USA. In the guise of supporting an organization that is “the premier leadership development organization for girls where young women discover their potential, connect with others and take action in their communities and the world” I gladly fork over tens of dollars to possess my all time favorite cookie – the thin mint! I have spent hours searching out the front window for the usual door to door pitch, but none have come my way. So I have put myself in the hands of a couple of parents at work who are dealing the desserty delights for their daughters.


Over the years various recipes of cookies have come and gone from the multi-striped order form and then there are the few standbys that continue to be offered for sale. But none - none match the power and presence of the miraculous mint and chocolate concoction. With its dimpled coating trapping the flavorful textured biscuit inside. Why are there 6 dimples on the top? I have searched the web and not found an explanation. Were they there last year? I’m afraid I couldn’t tell you.


In years past the nutritional panel provided some evidence for the addictive like force that these little devils seem to have. I’m sure that there is a logical explanation for it being included in the recipe. I have also searched the web exhaustively to try and find some reference to “crack” flour, or cocoa or some other reasonable inclusion in a cookie, but none have surfaced. 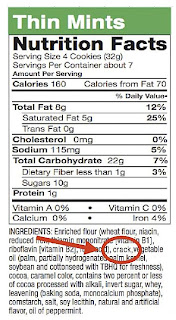 Fortunately the noted ingredient is no longer in use; however it has served its purpose well as many thousands have found themselves unreasonably obsessed with consuming and hording boxes of them. LOL


The affliction has led me and thousands of others to create our own recipes of delightful dishes based on the magnificent mint. I must admit I have slathered many different coatings onto them. Like making little round chocolate mint peanut butter sandwiches. I prefer chunky myself. Or replacing the common graham crackers in a few s’mores with a couple of thin mints, trapping the gooey glob of melted mellow between them. Sure it oozes out all around, but you don’t have to add any chocolate – unless you’re down right desperate. I’ve been known to line a bowl with a half dozen or more before adding several scoops of the finest French vanilla ice cream and some hot fudge topping. Or holding out until the ice cream is at its thick and creamy liquid stage to dip a handful or two of the cocoa covered discs and then slowly masticate them into a mouthful of ecstasy. The best and simpliest pleasure comes from selecting a few from a box that's been in the freezer for a day or two. Crisp chocolate mintiness to go with any warm drink or a tall glass of whole milk!!! Ahhh heaven in a box!

Hmmm not sure about a "dessert beer" flavored like my favorite.


There are untold numbers of mixed drink recipes that try very hard and come very close to emulating the little delicacies. My attempts have failed miserably - it's hard to make Jameson or Glenmorangie palatable after adding minty chocolate flavors or cookie bits. Here's another interesting idea, although I prefer sausage on mine! 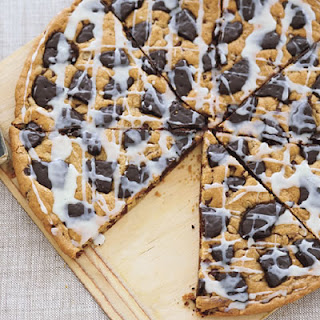 Yes indeed - a thin mint pizza! From none other than Rachael Ray! It's made with chocolate chip cookie dough, handfuls of thin mints and drizzled with white chocolate... yummy. Gotta try this one pretty soon!


Most of us with the addiction are very much aware of it and are thankful that they're not available just anywhere at anytime. When I got home last evening, with my dozen or so boxes of treasure I placed one in the freezer in hopes that they would render their deliciousness and indomitable texture the following evening in a celebration of week’s end. But not wanting them to become uneatable from some unknown cause I talked myself into making allowances to taste a single delectable dark brown chocolaty disc. However once I opened one of the wrappers I surmised that without being properly wrapped the remaining 15 would suffer some type of degradation and be somewhat less than perfect in flavor. It is unfortunate that I have such a weakness and low moral fiber that I chose to consume those that would’ve remained behind. I place the blame squarely on the shoulders of the local representatives of the Girl Scouts of the USA whose marketing savvy forced me to purchase so many of these so many years ago and continue to offer them for sale. I just pray that my cache lasts longer than last year's did!